Hi! This was my semester long project for the advanced programming class. Below I will explain how i got to where this thing is now, what went wrong along the way, and how you can make something similar in your engine of choice!

How I got here

First I tried to make a system for IK legs that were intended to be a drop-in addon. After assuming that legs are just a series of knees protruding from the central axis I created an atrocious system that could only handle legs inside a very specific range of values. Tweaking it a lot didn't help, turned out that this approach is deeply flawed as it assumes that any position can be reached by a constrained leg, which is not true, especially with the algorithm used. Feet would often sink into the ground despite my best efforts (as seen in gif above) as well as be placed to the side of where they were supposed to be.

Next came a physically simulated blob. It could sense ground all around it and its legs would realistically push and pull on it (depicted as simple lines to avoid previous complications). In this system the dependence chain looked like this:

In addition to that, the system for placing legs was not based on intent and just placed them at the point closest to the ground. Any attempts to stabilize system failed. It was physically accurate but looked ridiculous and unintelligent.

(Scroll to the top of the page to play with it!)

After making stupid things and failing I returned to one of my sources - the Rain World GDC talk about making daddy long legs creature in their game. The problem of the system entering a weird feedback loop was avoided by only having systems feed into each other in one direction:

The elements in this chain seem kind of abstract at the moment so I'll try to break them down one by one so you can see how this works under the hood.

Click, tap, or use direction inputs to move the target and see how the spider reacts.

The body moves toward the target ( User Input ) . While doing so it is affected by gravity. The acceleration and damping of the body are based on % of legs securely attached to a surface, making the critter more responsive the more legs are touching a wall.

If you hold spacebar while playing with the spider you will see different icons pop up around the legs. They represent different positions important to how they function:

Now that we know where the leg starts (body) and ends (its tip), we can draw everything in between. Instead of doing anything complex and sophisticated i just use a rope simulation.

The simulation assumes the leg is a chain made of elastic links that push and pull on each other in an attempt to reach their desired length.

While doing this - the positions, speeds and forces affecting each link in the chain are stored in an array and do not touch the objects that actually display the legs, allowing the simulation to run faster.

What it does is:

Because this simulation is relatively cheap to run and because it does not like high delta time values - each physics time step is divided into 5 smaller ones. After all the calculations are complete - the positions are fed into the line renderer that displays the legs.

This one s gotta be its own big category because there's a lot to talk about.

To get the bubbling mass to look how it does i just used a particle emitter that spawns black round particles in a circle and pushes them away before attracting them back to centre. 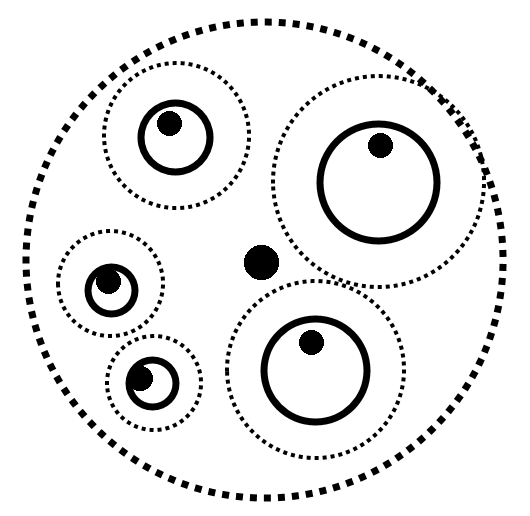 What happens to each eye during a physics step:

Fun fact! To make sure the eyes do not visually go out of the body, each eye has a black outline to make sure that even if its sticking out a bit it still looks fine.

from right to left:

Eyes and parts of cursor are not affected by the last 2 as they are rendered after them. 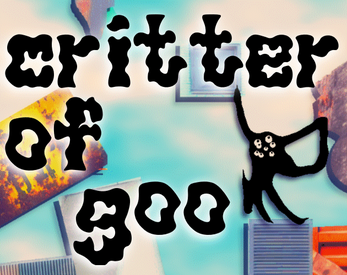